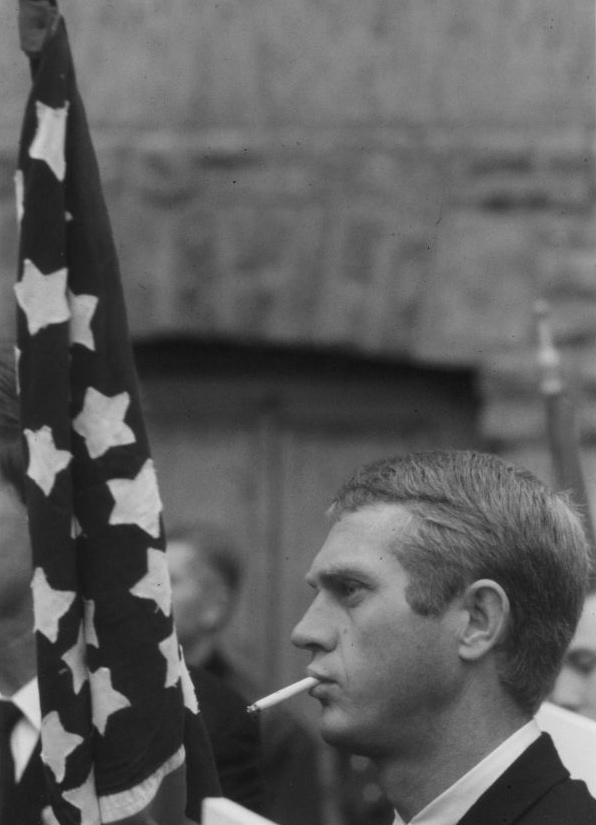 I live for myself and I answer to nobody

Steve McQueen, ironically displaying his signature, a perfect balance of allegiance and rebellion.

Iconic star of the 60s and 70s, Steve McQueen is a Hollywood superstar. His anti hero roles have made him an icon of the culture that fought against against the Vietnam War in the 1950s and 1960s.

Charismatic actor, he has participated in classic films like The 7 Mercenaries - The Great Escape - Butterfly - The Thomas Crown Affair - Ambush - The Towering Inferno and some scenarios like Bullitt and Le Mans related to car stunts and to racing. Compete or align it often including large events known as the famous 12 Hours of Sebring.

Two true passions which he will have the taste to the end. Wild, sensual, unpredictable, violent, paranoid and sensitive character has characterized this whole rebellious and free generation converted to the consumer society as embodied in the car and a certain lust for life ...

The Great Escape in 1963. Motorcycle racing fanatic, Steve suggests itself the final scene, the famous motorcycle jump over the barbed wire border. Steve brought with him his friend Bud Ekins, experienced rider, who was hired as a stuntman. Steve pilot himself in virtually every scene except the famous jump at the end.

During the making of the film, Bud Ekins from Czechoslovakia to participate in Six Days in Spindleruv Min, where he won a gold medal. Return to Steve, he tells him that experience and then comes the idea of â€‹â€‹preparing a U.S. team to take part in this event next year. 1964 Steve McQueen is the USA from the largest motorcycle event, the Six Days in Erfurt, East Germany, from September 7 to 12, 1964.

Le Mans film released in 1971, traces the course of the 24 Hours of Le Mans in 1970. Steve McQueen has invested heavily in this shoot he considered a centerpiece of his career play. He finished second in the racing the 12 Hours of Sebring in March 1970, and in this film were actually run the 24 Hours of Le Mans with Jackie Stewart as a teammate.

The refusal of the insurance lead Steve McQueen do 24 hours only as contained in the stands for connection plans. But he managed during the summer of 1970 for rent Le Mans for three months, with 25 race cars, drivers and mechanics, and lead itself to complete the shooting of the race.

The filming was not decidedly easy, delayed by serious accidents. Derek Bell's Ferrari caught fire and the driver was burned on the face and hands. David Piper was amputated right leg after hitting a guardrail with his Porsche 917 and Steve McQueen brushed death narrowly avoiding a truck three cents an hour. The film was a commercial failure, which is more like the story, it is today the best film dealing with the theme of racing, mainly for the quality of his shots. With the adrenaline and the pressure on the circuit during the race and for his project.