My Time With Joe Bortz by Chuck Derer ...

As a guy growing up in the United States who like many others had a fascination with cars I soon learned the name, Joe Bortz. Today there are two well known names in the US car hobby. One is Jay Leno and the other is Joe Bortz. I know that there are many other names and collections out there but these two men have driven their names to the top through ego, perseverance and achievement. Mr. Leno is probably the better known of the two. His collection of vehicles is varied and shows his general interest in the automobile culture.

Joe Bortz on the other hand has made saving concept cars his specialty. Concept cars are the one off show cars that the automobile makers build to whet the appetite of the car buying public. It is a chance for the automakers to gauge the acceptance by the public of what the automakers plan for the future. Once the cars have had their time in the public eye, they are supposed to be destroyed.

Several years ago I and my 1948 Willys Overland Jeepster were invited to participate in the AutoHistorica Car Show in Highland Park Illinois. There was a featured automobile designer that year named Brooks Stevens. He designed the Jeepster. There was also another Stevens designed car participating, the Cadillac Valkyrie. It also happened to be a concept car owned by Joe Bortz . I produce “RidesWithChuck”, a local access cable show that plays in the county where I live. I always travel with a video camera and a microphone. I approached Mr. Bortz about doing an interview. He turned me down with out explanation. That’s life. I learned that he didn’t live far from the show and regularly participated in it.

The next year I went back to the AutoHistorica. Joe Bortz was there with his 1955 Chrysler Falcon concept car. There are only two of these cars in existence and he owns one of them. The Falcon is a working, running car with a hemi engine. It is quite a nice sports car. I spoke with Joe about the car but I didn’t try to get an interview with my camera.

I have been videotaping vehicles since 1996. One thing I learned is to never let the car look bad. I have shot footage of a number of vehicles going through mechanical difficulties. I record the problems because that is what I do. The problems never reach the screen because one never lets the car look bad. I edited what I had that I could use, which isn’t much and combined it with some footage that I had of the Chrysler Thunderbolt and put the video on my YouTube channel. Sometime later I received a message from the Bortz people that they liked the video.

I replied that if the opportunity ever arose to videotape one of the Bortz concept cars, “I would jump at the chance!”. It turned out that the 1955 LaSalle II Roadster was about to be given an electric drive train so that it could be restored and driven onto a show field for the first time since it first appeared in 1955. Bortz, not being easily taken in interviewed me over the telephone for almost an hour. I knew that not much of what I was saying about myself was going to have much credence with him. I had him go to my YouTube channel and read the comments made by viewers to my channel. I have a reputation of my own.

A short time later we were all at Pioneer Conversions in Lemont, Illinois where the LaSalle II Roadster would be made to run. Much of the electrification of the car has been documented on my YouTube channel. On the 3rd of December, 2010 just a day or so before a big winter snow storm the LaSalle was driven for the first time in it’s existence. On that day Mr.Bortz was making auto history and I was getting a ride in a piece of it. This was truly a memorable day for me.

The drive train was removed so as not to hinder the restoration of the LaSalle body. In March of 2011 the car was shipped to Virginia where auto restorer Marty Martino worked his magic. It took a year to do but Marty completed his work and on the 22nd of June 2012 the car was delivered back to Pioneer Conversions to have the electric drive train reinstalled.

The LaSalle II Roadster will have it’s public debut in March of 2013 at the Amelia Island Concours d’Elegance.

It has been an honor and a pleasure to have had anything at all to do with this beautiful concept car from America’s past. 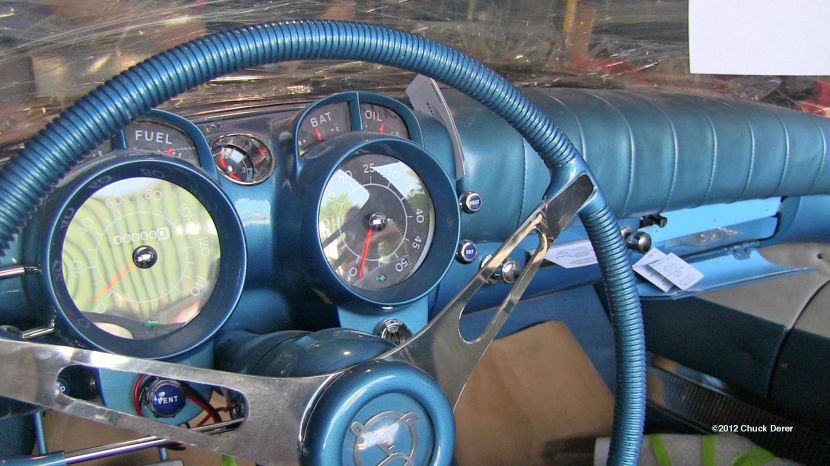 Rides with Chuck, video of the 1955 la LaSalle II.