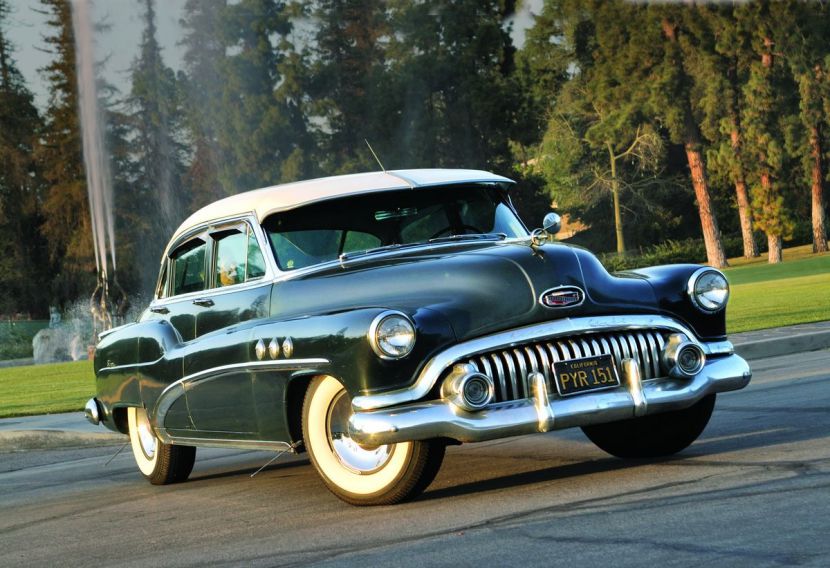 And such is the story with Mary Louise Largey, now 90 and living in Glendale, California--in the house she's lived in since she was 4 years old. "My father was named William--he had no middle name; he was the 13th child, and he was lucky to get even the one name. He was born in 1869, so he was no spring chicken when he had me."

In 1922, on the advice of his brother Huey, who lived in nearby Alhambra, William loaded the family in the 1919 Cadillac Touring car (which they had named Lizzie; the Largey family cars all tend to get names), came to California, and built a home; Mary Louise's sister, Lucy, was born around that time. The Cadillac's removable side windows are still in the garage. "Dad drove that car to the dump during the war," she explains of the Cadillac's fate. "They probably made it into bullets."

A new Packard arrived in the Largey driveway for 1929: a seven-passenger model with jump seats and sidemounts. Mary Louise's older brother, Edward, was of driving age by then. "He was supposed to be taking us down to church, but the gasoline man down the street called my mother and said she'd better watch it, that Edward was sailing around with his friends in the car, that you can't trust him. No more taking us to church after that," she recalls.

Both the Cadillac and the Packard made biennial runs to Texas to visit family (without Edward at the helm).

For 1952, Buick was all about the status quo--they were very similar to the 1951 models, in both content and style. That was fine: Buick had been doing well since the war, placing 4th in overall sales for the year, and machines like this Series 50 were the reason. A total of 71,387 four-door Supers were built for 1952, and ran a 263-cu.in. straight-eight good for 128hp.

As to getting the work itself done, "I talked to the mechanic, and he recommended a shop in town to work on it. I went there, and I'm sure he rues the day I ever came in. I needed a part, and he said he didn't think he could get it. Not sure if I got it from Hemmings" --yes, Mary Louise has scoured our classifieds for parts on occasion-- "but I got a new one. I came back, and he'd found a used one. I said to him, 'I don't want a used one, I have a new one.

They had already taken my engine out, and it was sitting on the ground. Well, we had a fight, and I didn't back down. I raised my voice--I had had a lot of practice fighting with my sister. Then I banged my cane on his counter; he thought I was going to break it."

The mechanic may have gotten the last laugh though: "When he put it back together, he didn't put the Dynaflow back right. Later, it wouldn't release out of park without three people rocking the car." There's also a replacement Stromberg carburetor sitting atop the intake manifold--"it was $500, which I thought was steep, but I couldn't get one." At least the local seller had the decency to come to Mary Louise's house and install it himself, there on the driveway. "And it still does run quiet; sometimes you don't hear it. People at work, they were always amazed that you could hardly hear it idle.

"I stopped driving in ... let's see, I got my heart done in 2003...what year is it now? 2009? Oh, probably 2005 or so, I stopped driving. I had another Buick, a 1990 model, and my optometrist told me that I was legally blind. He said that if I was hit at a stop sign and they found out I was legally blind, even though I'd been sitting there, they'd just sue me and sue me. I drove that car straight home and sold it within the week."

Yet Betsy remained. How could she not ?

Instead, it seems entirely possible that Tim Mings might end up with it. Tim lives next door to Mary Louise, works on cars for a living, and is the guy who clued us in to Mary Louise's existence, and her life-long connection with Betsy. Five years ago, she asked him to take it to the gas station to fill it up. Today, Tim's done some basic repairs, helps out a little around the house, and he's driven Betsy all around Southern California, including on Pacific Coast Highway in Malibu - with Mary Louise riding shotgun, of course--where they stumbled upon the local Lamborghini club parked at a local eatery. "They were little and she was big," Mary Louise recalls, "but she was as classy as the rest of them !"

Mary Louise’s funeral will be held Tuesday, May 29, 2012, at Forest Lawn Memorial in Glendale – the very place where we photographed her Buick back in 2009.

Article : By Jeff Koch published in The Hemmings Classic Car,